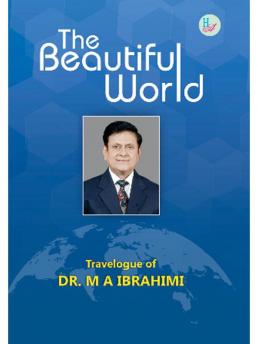 Since my childhood, it has been my earnest desire to see this beautiful world of ours. It has been my good fortune to have visited 31 countries so far, spread all around the globe, and in the process, I have stood in awe and admiration before some of the greatest natural and man-made wonders of the world. My journey is not yet over, as I have many more countries to visit, but what I have learnt from my travels so far is that there is far more that unites people than what divides them. Although we tend to view mankind through the prism of religion, race, colour, language, culture and several other features, which distinguishes one from the other, I have seen that the same hopes, desires, wants, aspirations and fears animate the peoples of the world, in whichever corner of the planet they happen to inhabit. Today, when the marvels of modern science and technology have annihilated distance, the world has indeed become a global village, and the people residing on the planet can be likened to beautiful flowers in a vast garden with different cultures and different identities flourishing and blooming. Today there is far greater interdependence and globalisation among peoples due to economic activity, business and trade relationships, education, employment, and medical facilities, tourism, pilgrimage, etc.  In case of any big loss of life in natural calamity, disaster, earthquake, war, violent internal conflict and tragedy taking place in any part of the world the people of the world are united in mourning the loss, and stretching their hands to help and alleviate suffering. My travels have taught me that mankind wants to live in harmony, happiness and peace. The people of the world share similar feelings of happiness and sorrow. The message of love should be spread all over the world.  Travel builds social and cultural relationship and removes suspicion, hate and prejudices. It brings together people of different cultures and fosters bonding. It is in that spirit, and on the insistence of friends and literary personalities that I am presenting this travelogue, which is titled The Beautiful World in book form. The write ups of travelogue, photos and videos of all countries that I have visited are also uploaded on my website  www.maibrahimi.com

A man of varied interests, and several accomplishments, Dr. Mohammad Ashiq Ibrahimi has made a distinct contribution in many fields. Born to Nasima Khatoon (death 27th March 2012) and Mallick Mohammad (death 22nd February 2012) in Silao village in Nalanda district of Bihar state, he made his mark even as a college student by becoming President of the Bazm e Adab in the St. Xavier’s College Ranchi where he also won several prizes in English debates, and President of the UN Students Association in the Chota Nagpur Law College Ranchi. During that period he was also made Chartered President of the youth wing of the Lions Club of Ranchi. After a brief stint as a probationary officer in a bank and later in the Indian Revenue Service (IT) he competed successfully for the elite Indian Administrative Service and joined it in 1978 and got home cadre of Bihar. During his service career he had the opportunity to familiarize himself with several areas of government activity, including Higher Education, Industrial Development, Textiles, Cottage Industries, Handlooms, Handicrafts, Powerlooms, Wool, Jute, Corporate Affairs, besides Rural Development and Panchayati Raj, etc. As District Magistrate and Divisional Commissioner he used to go on Vikas Yatra every week along with other departmental officers for achieving fast and quality development in his jurisdiction. As District Election Officer and Returning Officer he conducted elections to the Parliament and the Bihar Assembly from 1984 to 1991. Because of his performance he was regularly appointed the Observer of Election Commission of India for elections held throughout India. He superannuated retired in the rank of the Chief Secretary of the Government of Bihar.

Reviews of The Beautiful World (English)